Register for a 10% discount coupon 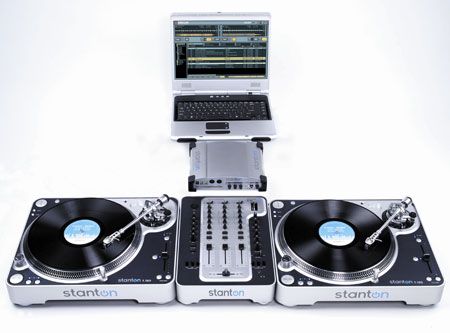 DVS stands for Digital Vinyl System, and it first surfaced back in 2001 with a package called Final Scratch. It's a techology that allows DJs to use classic DJ tools such as turntables or CD decks to play music from their laptop (instead of playing vinyl records or CDs).

How does it work?

It works with specific vinyl records and CDs that don't hold any music, but instead give off audio signals to tell the DVS DJ software where on the record/CD the deck is playing at any time. This enables the computer to play the audio file from it's memory at the exact point in the track that the deck is playing the record or CD.

The setup to use a DVS DJ system is very similar to a standard DJ setup. You'd need at least two decks and a mixer, but with the addition of a soundcard that sits in the middle of the decks and the mixer. The sound from the decks would plug into an input port on the sound card, then an output port would be routed on the soundcard to link the computer's replacement audio, from the music file on the laptop, to the mixer channel for that deck. Then the same loop is repeated on the other deck (audio in from deck to computer, and replacement audio out of computer into the mixer channel).

DVS is promising to Evolve!

As of 2018, there is a new exciting technology that theatens to replace the need for special vinyls or CDs for DVS DJ software. Phase is a wireless solution that doesn't require special vinyls or CDs, and may also eliminate the need for powerful sound cards. There isn't much information available about Phase yet, but we're keeping a close eye on it as we'd love to see exactly how powerful it will become.

This article was written by Mark Cochrane. Having mixed for more than half of his life, and being reffered to today as middle aged by his "loving" wife, he's been around the block a few too many times. From the first DJ mixers with EQs in the 90s, on to CDJs, and finally into the minefield of vastly ranging DJ and studio software.
All comments welcome, just login and comment away.

Send your music for a quote

Sometimes, it's just easier to show us your music and tell us what you want, and then let us get back to you.